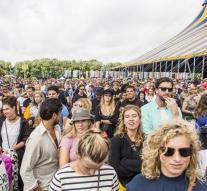 amsterdam - How long does it take before an epidemic develops and how do the infection hairs develop? Scientists at the Lowlands festival are trying to predict the outbreak of infectious diseases this weekend with a virtual 'zombie game'.

For health research, festival goers can put a special app on their phone, which only works in the Lowland area. At the beginning of the game everyone is healthy. The goal of the game is to keep uninfected as long as possible. Participants get infected if they get too close to a 'zombie'. Once infected you also become a zombie and you only have one goal: create as many other zombies as possible by infecting humans.

'' Many mathematical models have been developed for epidemics. These models contain some assumptions we would like to investigate further with this experiment, 'says one of the initiators Sandjai Bhulai, professor at the VU in Amsterdam. One of the assumptions is about which people make many and few contacts.

The research is conducted by, amongst others, the GGD Flevoland, RIVM health institute and the Games for Health Projects organization.