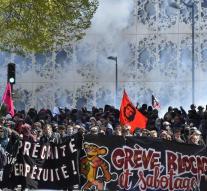 - In various towns in France is Thursday came to violent clashes between demonstrators and police. Opponents of the new Labour according to French media took to the streets in include Paris, Marseille, Bordeaux and Rennes.

Among others, the police used tear gas in Paris to disperse protesters. Estimates of the number of protesters in the French capital ranged from 15 000 (police) to 60 000 (organization). Both among police and among demonstrators injured.

Campaigners protesting since early March against the new law. Which enables employers include possible to introduce more flexible working hours and firing people easier. The law would lead to lower severance payments.