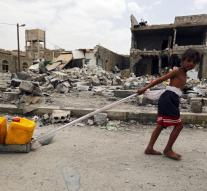 sanaa - In this violence- torn country Yemen are slain every day three children. They are affected by the use of bombs, grenades, mortars and homemade explosives. Thus Yemen after Syria the country with the most deaths and injuries caused by explosives. Said Wednesday the report " Nowhere safe for Yemen 's children ' Save the Children.

According to the children's rights organization since the escalation of the conflict, March of this year, more than 1,500 children died from direct attacks and by playing with unexploded bombs (duds). Hospitals and medical clinics are affected by attacks.

Save the Children has in the past nine months, more than 400 000 people, including 227 000 children, helped with include medical care, food and water. The local partner organization YEMAC warns children about the dangers of explosives that are not yet gone.