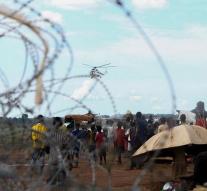 - The violence in the Central African Republic continues. By fighting between militant groups have been a total of 25 people dead. That the UN peacekeeping force (MINUSCA) announced Saturday. Six police officers and four civilians were slain because they were ambushed on the road from Bambari to Grimari.

The other victims died during an armed conflict between rebels of the Anti-Balaka 'and' Seleka. There were still several wounded. The blue helmets are themselves increasingly targeted by protesters demanding that they leave the country. That led Monday a shooting resulting in four deaths.