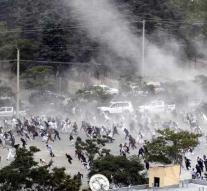 Bomb attacks by Muslim militants claimed the most victims, followed by bombing by the US Army.

The most serious attack was in the capital Kabul in May, when a terrorist detonated a truck full of explosives. In addition, 92 civilian casualties and almost 500 injured.

US President Donald Trump introduced a more aggressive approach to terrorists in the country shortly after he took office in January last year. In their turn they responded with heavier attacks. Only the past few weeks have already killed more than 150 people.