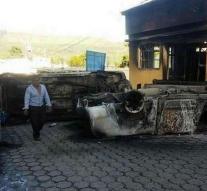 - An angry crowd has in western Guatemala lynched a mayor. Bacilio Juracán Leja was beaten first at each other instead Concepción and then fired, said the prosecution Monday .

According to the villagers, the mayor was responsible for an attack on a former mayoral candidate and human rights activist, Lorenzo Sequec Juracán. Strangers took his car Sunday under attack, leaving his daughter and niece were killed. Sequec Juracán survived the attack.

Guatemalans often take the law into their own hands, because crimes rarely punished or cleared.