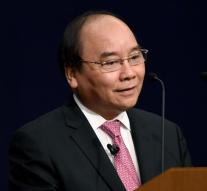 the hague - With representatives of more than one hundred companies in his wake, the Vietnamese Prime Minister Nguyen Xuan Phuc will visit the Netherlands on Saturday. It must underline the good relationship between both countries.

Phuc meets Monday, Prime Minister Mark Rutte, who was in Vietnam with a trade mission in June 2014. They speak each other during a work dinner at the Catshuis, the prime minister's office. There will be several members of the government, including Minister Lilianne Ploumen of Foreign Trade.

One day later, the Vietnamese Prime Minister goes past parliament. Furthermore, the program of Phuc includes a visit to the port of Rotterdam and the University of Wageningen. Phuc is in our country until Tuesday.