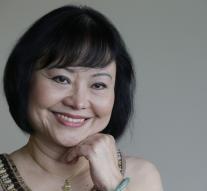 - The woman who as a girl became world famous by the photos which show how they ran screaming and naked after a napalm attack in Vietnam, get a laser treatment.

The photo of Kim Phuc in 1972 became the iconic image of the Vietnam War. Forty years later, she still suffers pain every day through the scar tissue that runs from her left hand on her arm to her neck and covers a large part of her back.

The now 52-year-old Phuc is in a dermatological center in the US city of Miami embarked on a series of laser treatments that should soften the scar tissue and so can relieve pain, reports the channel Sky News Monday. " All these years I thought I no scars and pain would have more in heaven, but now is heaven on earth for me ", she said.

The photojournalist Nick Ut took place after the South Vietnamese army accidentally the village of Trang Bang had bombed. The girl screamed, according to him : " Too hot, too hot " ! Napalm will stick to the skin, so they could not run away from the burning pain.

The girl had burns on one third of her body and scar tissue that was in place before the skin is almost four times as thick as normal skin. The treatment lasts for an estimated nine months.

Phuc now lives in Canada. The journalist won the Pulitzer Prize for the photo.