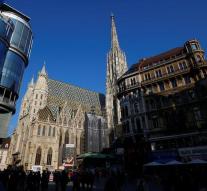 vienna - Vienna is again the best city to live in. For the eighth consecutive year, the Austrian capital at the top of a list that is annually compiled by consulting firm Mercer on quality of life. Amsterdam is in twelfth place in the list published Tuesday.

The top ten is well stocked with European cities with Zurich in second, fourth Munich, Dusseldorf sixth, seventh Frankfurt, Geneva in eighth, ninth Copenhagen and Basel in tenth place. The only non-European cities in the top ten are Auckland, which occupies the third position and Vancouver which is fifth.

The ranking has been fairly stable for years, only Brussels fell six places because of the risk of a terrorist attack and Rome fell because of continuing problems with waste disposal.