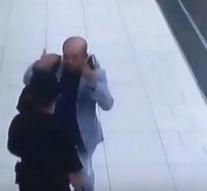 kuala lumpur - The murder of Kim Jong-nam, the half-brother of North Korean dictator Kim Jong-un, was captured on surveillance video. A video leaked last night via the Japanese channel Fuji TV. The authenticity of the images is not confirmed by the Malaysian authorities, reports Reuters.

The images can be seen that a wife Kim Jong-nam of approaching behind him and grabs his face. The authorities will assume that a toxic spray is injected in its face at that time. On the images that follow, it is seen that even running away the victim and reports to agents. He seems to be clear with gestures that sprayed something in his face. According to police, he complained of dizziness.

Then the images are briefly interrupted, then it is seen that medical personnel gathered around Kim Jong-nam. The attack was carried out on February 13 at the airport of the Malaysian Kuala Lumpur, where the victim wanted to take a flight to Macau. Western countries assume that Kim Jong-un was behind the murder. The results of the autopsy are expected Wednesday.

For the murder of four suspects stuck. Four others, all North Koreans are suspicious. Three of them were flown from Kuala Lumpur to Jakarta and then to Dubai.