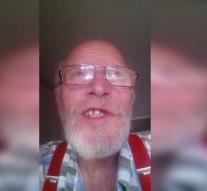 amsterdam - In an acclaimed video, an older man calls one Cassandra to sexual acts. It is about the alleged Alkmaar pedophile André K., so report NH News and Alkmaar Centraal.

The older man would be the Alkmaar pedophile André K. He earlier battled two minor girls earlier this year, after which their father went to K.'s house to commit a civil arrest.

The father, Cornel Gorsselink, told De Telegraaf earlier how his daughter (12) received filthy messages from K., who asked intimate questions and made sexual requests. He also sent pictures of himself to the girls 'with his tools', according to Gorsselink.

In the home of K., child pornography was found, but now he is free again. However, he got an internet ban.

According to Alkmaar Centraal, the latest video is already in advance of the suspension. 'But if it were found that this video was made and published by suspect during this recent suspension, it may ask the court to rescind the suspension so that suspects are locked up again,' the OM said to the local news media.