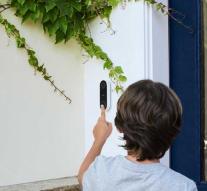 amsterdam - Almost a third of Dutch people indicate that they will not open the door unless they expect a visitor. This is shown by a study by Census Wide that was carried out among thousands of adults in early July 2018 on behalf of Google's home automation company Nest Labs.

The main reasons given by the respondents to ignore the door were not knowing who is on the other side. More than a third of respondents (35%), regardless of age or gender, claimed to be afraid to open the door to unknown guests or to be forced to talk to someone they do not know (21.5%).

Sellers (14.8%) are the most unwelcome guests. This involves not only having to talk about the fear with a salesperson, but also about the fact (30.7%) that they have to stop what they do. A fifth (21.4%) is even annoyed when the bell rings while they are not expecting anyone.

Receiving packages (on average three per month) is important for those questioned. On average, they wait more than five and a half hours for a delivery, in which there is also a chance of miscommunication with the deliverer (35.7%). And almost a quarter (23.4%) think the delivery company has not told them the truth about where they left the package.

' There is nothing more frustrating than taking a day off, waiting all day for delivery of a package and then notice that you missed the bell or knock on the door or that the package did not come with the van due to unforeseen circumstances. With a video doorbell you can get remote notifications when the doorbell is pressed and even have a conversation- for example asking the driver to leave the parcel in a safe place- or even with a neighbor, 'says Lionel Guicherd-Callin from Nest Labs.

In addition to the Hello video doorbell, competitor Ring has also been active for some time on the market for ultramodern doorbells: 'Our mission to reduce neighborhood crime is central to everything we do at Ring,' says Jamie Siminoff of Ring.

A video doorbell contributes to the safety of users and their neighborhood. From helping people with a disability to see more easily who is at the door and to be able to respond to them, up to and including the prevention of packet theft or burglaries.