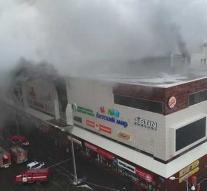 kemerovo - In Russia, the first victims were buried from the deadly fire in a Siberian shopping center. The bodies of two children and one adult were taken to the cemetery in closed boxes, the Russian news agency TASS reported.

President Vladimir Putin has declared Wednesday a day of national mourning because of the tragedy, which has cost the lives of at least 64 people. Funeral services are held in three churches in the city of Kemerovo, where hundreds of residents went out into the streets to ask for clarification about the cause of the fire.

The authorities have so far identified 27 bodies according to TASS. A total of fourteen wounded would be in hospitals, including two children.