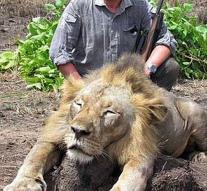 - An Italian vet was fired because he shot a lion on safari in Africa.

Luciano Ponzetto recently posted a picture of a few years ago on Facebook, which he poses with a dead lion. This launched a storm of criticism and got the vet even several death threats, Italian media write.

According to the man, he has done nothing wrong and had permission to shoot the animal. He also thinks that his hobby hunt easily combined with his profession as a veterinarian.

Angry Italians, however, were not satisfied with that explanation and are threatening Ponzetto what to do.

The employer of Ponzetto stated initially that the hobby of the vet is legal. After all the fuss was however still decided to ask the man inactive.,null, We are totally against hunting and any form of abuse of animals. "