Home / Tech / Vestager will meet US 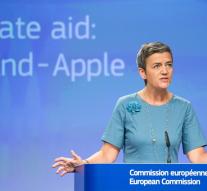 - The mega-recovery of 13 billion that Apple is imposed in Ireland in connection with illegal state aid could also benefit US citizens.

That said Commissioner Margrethe Vestager (competition) on Tuesday during a press conference in Brussels.

'Not all tax not paid comes to Ireland,' said Vestager, which hinted that the IRS may also come to demand a share.


The Danish politician invited countries to come into its investigation of Apple browse seeking tax levied not owned them. She thus seems to make a gesture towards Washington.

The United States criticize the harsh approach of the European Commission inter alia on the grounds that additional surcharges Europe ultimately to be paid by US citizens.

Multinational companies headquartered in the United States may indeed deduct additional tax bill of profits tax they pay at home.


'If countries are claiming their share will be deducted from the amount that now goes to Ireland. '

In response, Apple says nothing wrong to have done. The company announced to enter an appeal.

The Commission's decision, according to the tech giant nbsp; 'An attempt to rewrite the history of Apple in Europe, ignore Irish tax laws and undermine the international tax system on the go.'

According to the tech company, the question 'is not about how much tax Apple has or has not paid but about which government collects the money.' Apple warns of nbsp; 'Serious adverse effects on investment and jobs in Europe'.