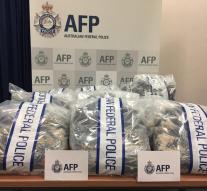 sydney - Police in Sydney in Australia found 1.2 tonnes of MDMA, the active ingredient in the drug ecstasy. It is the largest amount of drugs seized in the country this year, and one of the largest seizures in the country ever. Two Polish men have been arrested and possibly get a life sentence. That report British media.

The MDMA had a value of around 101 million euros, thus 4.1 million ecstasy tablets could be produced, police said. The drug was hidden in lead roles in aluminum housings. It was described as a 'highly sophisticated concealment'. The police think the drugs came from the Czech Republic, saying that the two arrested men, 28 and 29 years old, part of an international criminal gang.

Justine Saunders, Acting Deputy Commissioner of the Australian Federal Police, said the crime 'international consequences'. 'This is from the Czech Republic and it has found its way to Australia, so this is larger than the two people we have arrested. The investigation will continue and we expect further arrests. '