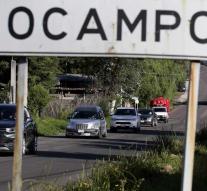 mexico city - In the Mexican village of Ocampo in the western state of Michoacan, 27 police officers and a local civil servant have been arrested on suspicion of involvement in the murder of a mayor candidate. It is the third politician who was murdered in Michoacan last week, reports the BBC.

On Thursday, 64-year-old Fernando Angeles Juárez was shot dead by armed men on one of his estates. The businessman had signed up to the center-left Party for Democratic Revolution and put his candidacy for the mayor's position.

After the murder, the federal police had the municipal safety adviser in mind as a suspect. When they wanted to arrest him, local agents stopped them. The entire police department was arrested the next day.