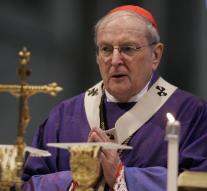 cologne - The former Archbishop of Cologne, Cardinal Joachim Meisner, died on Wednesday at the age of 83 during his holiday in a German spa.

Meisner was known as very conservative and was highly controversial in Germany and beyond. His comparison of Holocaust abortions caused a lot of dust to rise. He once labeled art without religious purpose to 'entartet', a reference to the Nazi term for degenerate art.

Meisner was appointed Cologne Archbishop at the end of 1988. This happened after a tumultuous mood where the chapter initially failed to reach agreement.

Pope John Paul II changed the rules that made it happen. With Pope and his follower Benedict XVI, Meisner was on very good foot. The current Pope Franciscus sent Meisner forced retirement in 2014.