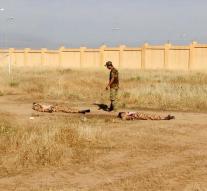 baghdad - Certainly two people have died in suicide attacks on a base in northern Iraq, where American advisers are also involved. The attackers disguised themselves as members of a Kurdish militia.

'They wore uniforms like the Kurdish peshmerga and shaved their beards so they looked like we,' said a source. At the attack, at least two fatal casualties fell and six people were injured. Five attackers also did not survive. They died when they drove their bombs at the entrance to the base in Kirkoek or were killed by Kurdish warriors.

Islamic State has claimed responsibility for the attack. The terrorist organization claimed in a statement to make dozens of victims among the 'crusaders and apostates' referring to Western advisors and Kurdish fighters.