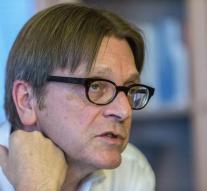 brussels - The board of the European Parliament has appointed three negotiators to oversee the departure of the United Kingdom from the European Union. The former Belgian Prime Minister Guy Verhofstadt, who leads the Liberal group in the parliament, the chief negotiator is.

The appointment is expected next week formally sealed on Thursday in Strasbourg, said a spokesman for Verhofstadt Thursday.

On behalf of the European Council of Heads of Government has already appointed the Belgian diplomat Didier Seeuws. He was previously spokesman Verhofstadt. The European Commission pushed the Frenchman Michel Barnier emerged as negotiator.


All three European institutions must approve the agreements reached on the British departure from the EU. Negotiations on this, however, can only start if the British Article 50 of the European Convention set into force. This is done until next year. according to the treaty negotiations may take up to two years.

Donald Tusk, President of the European Council, was Thursday visiting British Prime Minister Theresa May. He called her on the withdrawal process to begin as soon as possible. He says this is in the interest of everyone. Tusk hopes that the ties between the EU and London remain 'as closely as possible.'