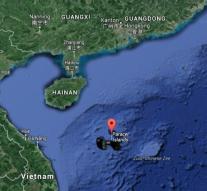 - The Permanent Court of Arbitration in The Hague does verdict Tuesday in a case that revolves around the claim of Beijing that is virtually the entire South China Sea Chinese. The linchpin of the conflict are the Paracel islands, situated between the coasts of Vietnam, China and the Philippines.

The Philippines has filed the case to the international arbitration court and hopes that the court is not legally labeled the Chinese claim. Beijing has already managed to attract no notice of the decision as unfavorable to China. The court has no power means to carry out a sentence.

The court's ruling is not about who the Paracel islands are exactly, but on whether a state from which islands or reefs can still send out more territorial claims. China claims almost the entire South China Sea, even reefs that lie near the Philippine coast. It leads to protracted conflicts except the Philippines, Vietnam, Malaysia and Brunei.