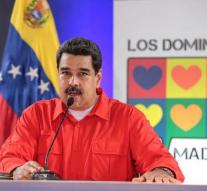 caracas - Venezuelan President Nicolás Maduro warned on Tuesday for war if his opposition to socialist government is being overthrown by protesters. The demonstrators have been on the streets for three months to protest against his rule.

'I promise the world, and I hope the world is listening to protest after ninety days, destruction and death,' said Maduro about anti-government protests. The riots have already cost 75 people lives in the country since April.

Maduro: 'If Venezuela is thrown into chaos and violence, we go to battle. We will never give up and what can not be achieved with votes, we will do with weapons. We will free the country with weapons. ''

Opposition leaders call Maduro a dictator who has broken a once-lucky economy. Maduro calls them just violent leaders of a coup.