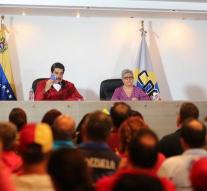 caracas - Venezuela residents need to vote in July for a new congress. In December, the local and regional elections for mayors and governors will follow, as the government has announced. Those elections were actually scheduled for 2016.

In the meantime, President Nicolas Maduro continues with his plan to rewrite the constitution by a specially convened civil council. According to opponents, he gains more power through this amendment.

In the South American country it has been restless for a long time. Venezuela has huge oil reserves but is in a deep crisis. For months, residents have protested against government policy. The opposition demands free elections, the release of political prisoners, respect for parliament and better care of the citizens with food and medicine.