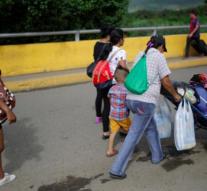 - Venezuelan women stabbing in droves across the border to sell their hair in Colombia. With the proceeds they buy food, diapers and other necessities, where the economic crisis in their country glaring lack is.

On the bridge of San Antonio to the Colombian border city of La Parada dozens of males, who said sheds some two hundred women a day to the places where they can let their hair cut. Hair extensions are made, which are sold in major cities.

Celina Gonzales (45) was an hour in line before her mid-length brown hair was lost. She got 60. 000 Colombian pesos, more than 18 euros, the average monthly wage in Venezuela. ' I have arthritis and need medicines. This is not much, but I can at least buy painkillers. ''

Some women complained that their hair was messy cut and had regrets. Others traveled in vain to the border, as Maribel from Tachira. ' I am here because I have nothing to eat, but they found my hair to thin and short. ''