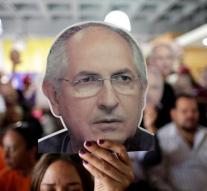 caracas - The Venezuelan authorities have put opposition leader Antonio Ledezma again under house arrest after being put to prison on Tuesday. This said his wife Friday on Twitter.

Ledezma and another opposition politician, Leopoldo López, were taken from their house and transferred to prison. According to the Supreme Court of the South American country, the politicians wanted to flee.

Maduro won a controversial election for the constitution of a constitutional assembly on Sunday, giving him much more power. López and Ledezma have been opposed to other opponents like that.