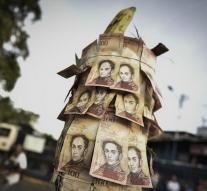 caracas - Venezuelan President Nicolas Maduro announced Saturday that the banknote worth 100 Bolivar (almost 10 million) still has not been abolished and until January 2 remains valid.

Last week he made suddenly aware that the banknote with the highest value would be taken out of circulation within three days. But as new banknotes with a value of 500 Bolivar were not available, there was chaos in the banks, where people panic wanted to exchange money. Venezuela civilians continued fierce protests. In the southern state of Bolivar called a mayor, even a state of emergency after looting in shops.

The new banknotes are printed in the United States and Great Britain have not delivered yet. President Maduro said on television that there is ' international sabotage. 'Aircraft with the banknotes would be forced to change direction.

Venezuela is struggling globally with the highest inflation. The government gives no official figures, but experts expect 600 to 700 percent inflation in 2016. For 2017 expects the International Monetary Fund (IMF) even an inflation of more than 1. 600 percent.

Venezuela has long suffered from a severe economic crisis, although it has the world's largest oil reserves. However, because of the low price of oil reserves are those little value and the country hardly money. Companies can therefore buy almost any raw materials from abroad and in the supermarkets are many empty shelves.