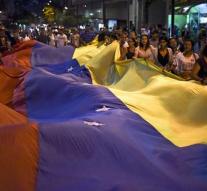 caracas - Venezuelan President Nicolás Maduro has called on ministers to provide their positions. The departure of the ministers should pave the way for a process of renewal, the Socialist leader said on Tuesday (local time).

The president is under pressure since the opposition Sunday posted a huge victory in parliamentary elections. Opposition parties seized according to the National Electoral Council a two-thirds majority of 112 seats in parliament. It was the first time in sixteen years that the ruling PSUV party that has a majority.Although the Socialists have located a defeat in the elections, that does not mean that Maduro must leave immediately. His term only expires in 2019. Within the opposition vote to a referendum on the position of the president, but there are nearly four million signatures required.
NEW