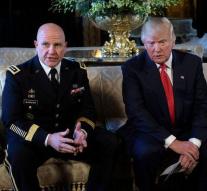 washington - The National Security Adviser of US President Donald Trump, Herbert McMaster, has observed the Venezuelan Government's strict democratic principles. Parliament and constitution must be respected, so the Washington White House was told on Saturday.

McMaster received Friday Julio Borges, the president of the opposition-dominated Venezuela National Assembly. McMaster and Borges agreed that the current crisis in the South American country should be brought to an end quickly and peacefully. The Venezuelan government must comply with the constitution, release political prisoners, respect the National Assembly and organize free and democratic elections.

Last week, Socialist President Nicolás Maduro announced the formation of a new kind of parliamentary representation that has to make a new constitution for Venezuela.