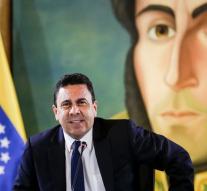 caracas - The Venezuelan government does not intend to dispense with a controversial plan to draft a new constitution. 'Nothing or nobody can stop this. The constitutional assembly will take place, 'said Minister Samuel Moncada (Foreign Affairs) on a press conference on Tuesday.

Socialist President Nicolás Maduro is planning to establish a new organ to rewrite the constitution. He passes other institutions like the parliament. There are opposition members now in the majority. They turned out against the plan.

US President Donald Trump called on his Venezuelan colleague to abandon the plan on Monday. If not, then follow economic sanctions. Moncada did not impress with that warning on Tuesday, which he called 'an innocent threat of a xenophobic and racist government'.