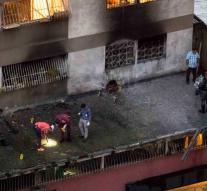 lima - Venezuela has asked the police in Peru to help find two Venezuelans who would be involved in the attack with drones during a speech by President Nicolás Maduro. The Ministry of Foreign Affairs of Peru has made it known.

The Venezuelan government holds the opposition and anti-Maduro activists responsible for the alleged assault on the president's life through explosives loaded drones. The Venezuelan authorities have already arrested fourteen suspects for this.