Home / World / Venetians want to lock on the city 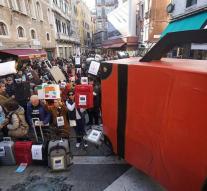 - The people of Venice are tired of being run continuously upside down in their city by hordes of tourists. The Venetians have therefore proposed during a demonstration at the council to set a limit on the number of tourists.

During the protest on Saturday were many people with empty suitcases through the streets, which they want to show that they can leave better. The population goes back a thousand annually. The Venetians are not against the tourists themselves, but against the policy of city authorities, who put the last forty years every effort to be the visitors' sake.

Each year as many as twenty million people the Italian city of canals. This makes them the 54 926 residents of the old city far the boss. One quick errands, there is not. Wander through their own city, is virtually impossible for the Venetians.