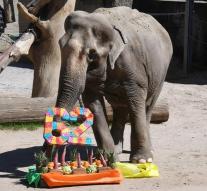 karlsruhe - The elder elephant in Germany celebrated her 62th birthday on Wednesday. The elderly lady Rani, who came to Karlsruhe Zoo in 1957 at the age of two, was delighted with a vegetable cake that suits her size. That told spokesman Timo Deible. Because the exact date of birth of the Asian elephant cow was unknown, it was determined on 17 May.

Deible said 62 years for an elephant in captivity is very special. The average life expectancy is about 45. In the wild, it is 35 to 40 years. Rani continues her old day. If she were to lie down, she, according to Deible, no longer got up. In order to make the animal's life a little easier, a beam is placed in the elephant house to allow the head to rest.

In the Netherlands Irma is the oldest born in a zoo elephant. She lives in Diergaarde Blijdorp and will be in September 47.