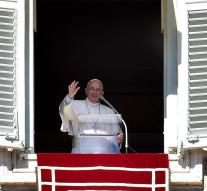 - The Vatican has opened a shelter for the homeless. Gift of Mercy called the dormitory , which was inaugurated with a mass. It has informed the Vatican on Monday.

Every night 34 homeless can get a place in the building of a former travel agency near the Vatican. Realizing the shelter was a personal wish of Pope Francis. Registered homeless can stay a maximum of thirty days and must make way for another.

The pope did not have to search for these people, because especially in the vicinity of the Vatican life many homeless. Those who sleep in the new home, there may be a shower and free haircuts. The Pope has called for the homeless once again to visit the Sistine Chapel, or to attend a concert in the Vatican.

Recently, the Pope know that two parishes in the Vatican will take an refugee family.