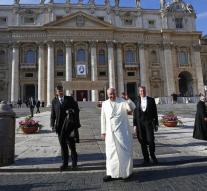 - The Vatican should be much tougher action against people who have committed financial crimes on behalf of the bank of the church, such as money laundering. This is contained in the report by Moneyval, part of the Council of Europe.

The bank of the Vatican for thirty years is plagued by scandals. Moneyval has repeatedly researched there. According to the inspection body the Vatican has recently made ​​considerable progress, but the Holy See legally it must firmer stance against the perpetrators of financial abuse.,null, The Vatican has many issues properly addressed. But there is still a lack of indictments for money laundering and other matters. This situation must be improved '', Moneyval states in the 150-page report.Pope Francis has already often been able to attach much value to solving the problems.
NEW