Home / World / Varoufakis: Greece has not been saved yet 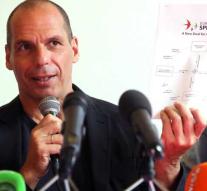 - Greece has not yet been saved after the third aid package, says Yannis Varoufakis, the former Greek Minister of Finance, Monday in the German newspaper Bild. ' Greece is at the same point, is in the same black hole, and it sinks deeper every day. Also because the savings guidelines of the creditors prevent investments and consumption.

The national debt has not decreased, but has increased further. 'We now only have more time to repay more debts,' said the former minister, but the state is still bankrupt, the population has become poorer, businesses are still going bankrupt and the gross domestic product is about 25 percent.

Varoufakis resigned in July 2015, after having been in office for about half a year, in order to regain the negotiations with the creditors. In a referendum, the Greeks rejected those savings guidelines of international creditors.

On Monday, the last aid program for Athens ends. Since 2010, EU partners and the International Monetary Fund (IMF) have given 289 billion euros in credit to Greece, which was in financial distress due to the banking crisis. In exchange, Athens had to implement hard reforms, cut social spending and implement tax increases. It also had to promise to stick to it.

Eurogroup leader Mario Centeno said on Sunday evening that he is confident that Greece can now stand on its own feet financially without a new aid. According to Centeno, the purpose of the rescue measures and reforms of the past eight years was to provide a new basis for healthy economic growth. ' It took much longer than expected, but I think we succeeded. '