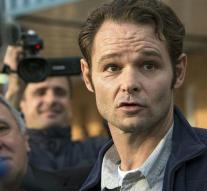 - Romano der Dussen demanding 6 million compensation from the Spanish state. That Spanish media reported. The Dutchman was twelve years innocently after a wrongful conviction for rape.

Should he get the compensation means 77.50 euros for each day he spent behind bars. The Dutchman was 4400 days in seven different prisons. He was acquitted in February after a long legal battle.