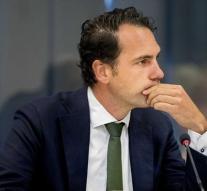 the hague - Martijn van Dam, who left this week as State Secretary for Economic Affairs, keeps dairy farmers responsible for the painful and forced contraction of their livestock, because too much manure was produced.

He says that in an interview with the Early Birds radio program on NPO Radio 1.

He responded to criticism of farmers who had to leave their cows away. Dam would have created a chaos. The Secretary of State would have waited too long for the introduction of phosphate rights and set rules that were not accepted by the EU.

The interview was recorded when Van Dam was a State Secretary, but was sent out after his departure. Van Dam is working as a member of the board of directors of the NPO.