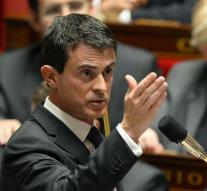 - French Prime Minister Manuel Valls on Thursday warned that the risk that terrorists may use chemical and bacteriological weapons. He has announced that it will extend the state of emergency in response to the terrorist attacks last week by three months.

The threat of terrorists using chemical weapons keep the French occupied since the attacks of 13 November in Paris and the publication of a communication from the Ministry of Health the next day. The ministry distributed November 14 to administrations commissioned to produce a certain antidote " neurotoxic organophosphates ". The Ministry refers to toxic chemical compounds that include damage to the nervous tissue.

The antidote that the ministry wants to have in stock, according to French media made ​​exclusively in institutions of the armed forces. The discreet communication published by a concerned Member as " extremely alarming, " described.