Home / World / Valls: France can not be destabilizing 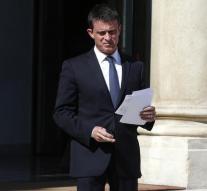 - French Prime Minister Manuel Valls on Friday after crisis talks said that his country will not let destabilized by terrorists.

'The goal of terrorists is to spread fear and panic and the threat of terrorism is a heavy burden for France. But this is a great nation and a great democracy that can not be led astray, '' Valls said after the third major terrorist attack in the country eighteen months.


In Nice Thursday night caused a 31-year-old Frenchman of North African descent with a truck destined for slaughter refrigerated transport on the Promenade des Anglais, where a crowd had gathered for the fireworks. Hollande, the massacre which certainly 84 people were killed Friday labeled as terrorist attack.

The truck was Tuesday in a commune bordering Nice, Saint-Laurent-du-Var, are rented for a few days.