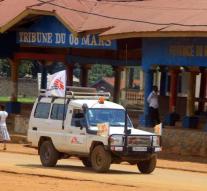 geneva - The vaccination program against the last outbreak of Ebola in the Democratic Republic of Congo can start on Wednesday. This has been confirmed by the World Health Organization (WHO). Medical first responders will be vaccinated first. After that, the approximately 900 people are identified who have been identified as at risk.

This time the virus emerged in the northeastern province of Kivu, a turbulent region near the border with Uganda and Rwanda. So far, 43 suspected cases of infection have been detected, including 33 patients who have already succumbed.

According to WHO director Peter Salama, this is also the Zaire strain of the dreaded pathogen, but there is no connection with the ebola epidemic earlier this year, 2500 kilometers to the west. This too demanded more than thirty lives and was brought under control with, among other things, an experimental vaccine.