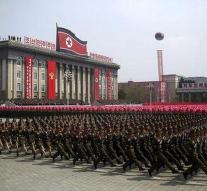 new york - The United Nations Security Council has taken a stand against Monday's latest rocket launches in North Korea. The Security Council condemns the missile test of the communist country and warns that launches contribute to the development of nuclear weapons transport. In addition, the tests increase the tensions that are already high in the area in and around the Korean Peninsula.

North Korea launched a ballistic missile that disappeared from Russia on Sunday. The rocket would have been launched near Kusong, in the province of Pyongan. After a flight of over seven hundred kilometers, the projectile landed in the Japanese Sea.

It has been the tenth time that North Korea has launched a rocket since Donald Trump is president of the United States. Since 2006, sanctions have been imposed against North Korea because the country has held several nuclear tests and launched two long-haul missiles.