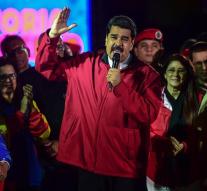 washington - The United States imposes sanctions on Venezuelan President Nicolás Maduro. The Ministry of Finance reported Monday that all assets of the socialist leader falling under US jurisdiction are frozen. American citizens can not do business with him anymore.

US measures are a response to the controversial Venezuelan election of Sunday. That 'illegal election shows that Maduro is a dictator who accompanies the will of the Venezuelan people,' said Minister Steven Mnuchin (Finance) in a statement. The Venezuelan Government has not responded to the penalty.

The US had already warned Maduro for action if he would not blow the election for the controversial constitutional assembly. The Venezuelan President put that warning next to him.