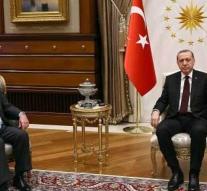 ankara - The United States recognizes that Turkey has the right to protect its borders. That is what the American minister Tillerson (Foreign Affairs) said on Friday after consultation in the Turkish capital Ankara. Tillersons Turkish colleague Cavusoglu said that steps have been taken to improve mutual ties. They have been under stress in recent weeks.

Tillerson is visiting for two days and has, among other things, spoken 'openly and productively' with President Erdogan. Tillerson stressed that both countries have the same goal in Syria, namely defeating IS, bringing more security to an independent and reunited Syria.

Ankara also said that work is being done to normalize relations between the two countries. These have been strained lately, including a Turkish military operation against the Kurdish YPG in northwestern Syria. That moisture with the support of America against IS. Ankara, however, regards the YPG as a terrorist group.

Turkey wants to extend its offensive to Manbij, also controlled by the Kurds. There, however, the United States has stationed its own troops that cooperate with Kurdish fighters. Ankara wants the Americans out of there.