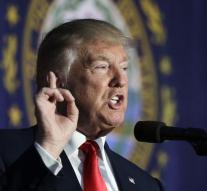 - The American newspaper USA Today in its 34-year existence always stubbornly refused to give readers a voting advice for presidential elections. The newspaper is now radically these policies abandoned by labeling the Republican candidate Donald Trump as ' totally unfit for the presidency. ''

USA Today explained that it would never take sides in the election, because emerge so far always very capable men who have ideological differences. But this year there are no two capable figures, the newspaper complains. The Republican candidate Trump, according to USA Today totally unsuitable. ' He has shown in his campaign of fifteen months of a lack of enthusiasm, knowledge, balance and fairness. ' And those are indispensable qualities for a president of the United States.

' Whether it is through indifference or ignorance, Trump reveals the most fundamental obligations which all presidents have been entered since the Second World War, such as unconditional support of NATO allies, opposition to Russian aggression and to provide assurance that the USA had pay debts. Trump from a worrisome admiration for authoritarian leaders and contempt for the protection that the Constitution offers us, '' the newspaper thrives on.