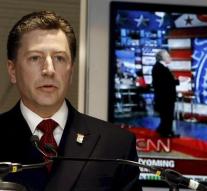 washington - Former US NATO ambassador Kurt Volker must play a leading role in ending the conflict in Ukraine. Minister Rex Tillerson (Foreign Affairs) nominates him as a special representative in the Eastern European country, said a senior adviser to the governor on Friday.

'Volker will coordinate all efforts of the ministry aimed at ending the conflict that occurred when Russia invaded the Crimea and later Eastern Ukraine,' said the adviser, R. C. Hammond. Volker was in 2008 and 2009 NATO ambassador for his country. He later started working as a consultant at the lobby company BGR Group.

In 2016, Volker refused to sign a letter of Republican foreign policy experts who turned against Donald Trump. He emphasized that he had no plans to work for Trump, but said to fear that such a warning of 'intellectuals' would be counterproductive. 'He would use it to surrender,' Volker said earlier to Reuters.