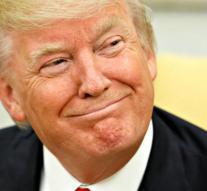 washington - US President Donald Trump will confirm on Thursday afternoon (local time) that the US is indeed pulling out of the Paris climate agreement. According to advisor Michael Catanzaro, the president will immediately seek a better deal. That reports the commonly-introduced American news site Daily Beast.

By striking out of the treaty, Trump dismantles the political legacy of former president Barack Obama. The Republican president has already stopped much of his predecessor's climate policy. The goal was to create more jobs by deleting rules.

It is still unclear how the White House wants to quit US participation in the climate pact. Such a process might take years. According to the sources, a small team, among others, is the head of the American Bureau of Environmental Protection (EPA), Scott Pruitt.

What does the climate treaty of Paris entail and what are the consequences if the Trump government no longer participates? Read here