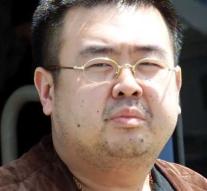 washington - North Korea is responsible for the killing of Kim Jong-nam, the half-brother of North Korean leader Kim Jung-un. That is the judgment of the US Department of State. According to the US, the North Korean regime has committed the murder and used the highly toxic nerve gas VX.

The US is going to impose new sanctions on North Korea for using the prohibited nerve gas. 'This public display of disdain for universal standards against the use of chemical weapons shows us the true nature of North Korea. It emphasizes once again that we can not tolerate any weapons of mass destruction program in North Korea, 'said Heather Nauert, spokesman for the US Department of State.

The US government made the decision for new sanctions on February 22, based on the American Chemical Weapons Control and Warfare Elimination Act (1991). The sanctions have already started on March 5, are largely symbolic and are in line with the wide range of economic sanctions that the US has already taken against Pyongyang.

Kim Jong-nam was murdered at the airport of Kuala Lumpur on 13 February. Two women, the 29-year-old Siti Aishah and the 25-year-old Vietnamese Doan Thi Huong, would have smeared the nerve gas in the face of Kim's half-brother. The case against the women is still running, they say they are innocent and claim that they were under the impression that they were cooperating in a joke for a reality TV show. The two women can receive the death penalty if they are convicted.

The suspicion has long been that North Korea is behind the murder.