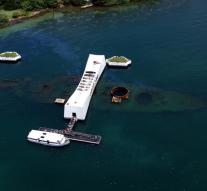 honolulu - Hawaii is Wednesday commemorated the attack on Pearl Harbor. With the surprise bombing of the US Pacific Fleet Japan withdrew the US abruptly in World War II on December 7, 1941, exactly 75 years ago. More than 2,400 Americans were killed.

The attack, which was a success in military terms, the Japanese sealed their own fate four years later they signed the surrender after Hiroshima and Nagasaki were devastated by US atomic bombs.

At the official commemoration on the Hawaiian island of Oahu are still present veterans who experienced the attack. Also in many other places in the US stopped in the attack.

End of this month, Shinzo Abe, the first Japanese prime minister to Hawaii to commemorate the victims. He does so with Barack Obama, who visited the first American president Hiroshima in May.