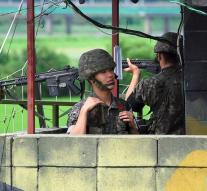 seoul - Tens of thousands of men from the United States, South Korea and several other countries begin Monday's annual exercise in preparation for a possible war with North Korea.

The large-scale exercise is condemned annually by North Korea. The state press office spoke last week about the 'reckless rattle of the saber' and warned that the practice could lead to actual war.

China has called on to postpone the practice of negotiating with North Korea. With this, Beijing hopes to seduce allied troops as Pyongyang. North Korea should delay its nuclear and missile tests simultaneously.

The US refused postponement, possibly because of fear that President Donald Trump could look weak after the 'fire and rage' warning he previously gave.