Home / World / US wants to restore peace Russians and Ukraine (2) 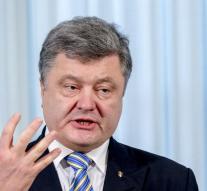 washington - The United States will intensify their efforts to restore peace and security along the border between Ukraine and Russia. That promised President Donald Trump to his Ukrainian counterpart Petro Poroshenko.

' We will be with Ukraine, Russia and all other involved parties work to restore peace to help them along the border, '' reads the statement Saturday from the White House. Kiev did according to the BBC reported that both leaders during the call emphasized the importance of a ceasefire.

In eastern Ukraine, the struggle between the Ukrainian military and pro-Russian separatists intensified lately. So Saturday was a senior commander of the separatists were killed by a car bomb in Luhansk. Ukraine hold the rebels responsible.

For the new US ambassador to the United Nations, the fight flared up reason to condemn ' aggressive 'action by Russia. ' We really want to improve our relations with Russia. However, the terrible situation in eastern Ukraine is one that requires a clear and strong condemnation of Russia's actions, '' said Ambassador Nikki Haley Thursday in the Security Council.

They also warned that the sanctions imposed on Russia because of the annexation of the Crimea, will be lifted only if Moscow return the peninsula to Ukraine.

Russia accuses Ukraine, in turn, of violating international agreements since the country bombarded civilians in eastern Ukraine. Further, Kiev throwing weapon in the battle that should not be used in accordance with peace agreements reached in Minsk.